Lalitha Kala Akademi  hand picked 11 well trained artists  and commissioned  them to replicate the dying murals of a Jain hermitage in Shravanabelagola .

Mathada Basadi  ,located in the middle of Shravanabelagola Town

is not visited by many people , as only the hillocks with their awesome shrines are better known . But it has  a hoary heritage value too . Aslo known as Charukeerthi Matha, it  was founded by Chavundaraya in the eleventh century. The present structure, though,  was built only in late 18th century. This mutt houses a good collection of sculptures of jain divinities  .

The walls are the most eyecatching . They are richly decorated with murals narrating the lives of Jinas and Jaina kings. 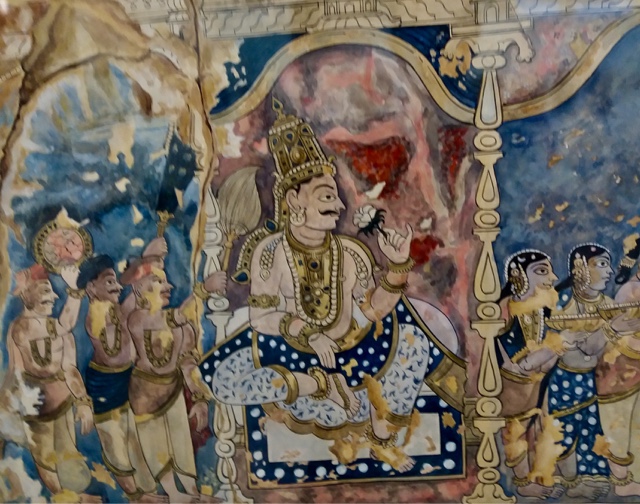 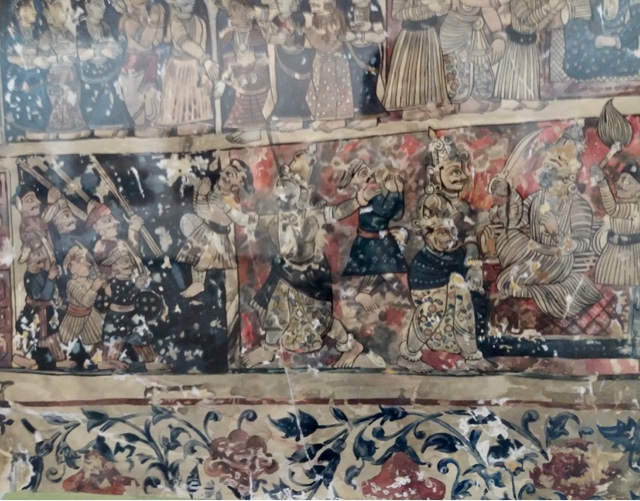 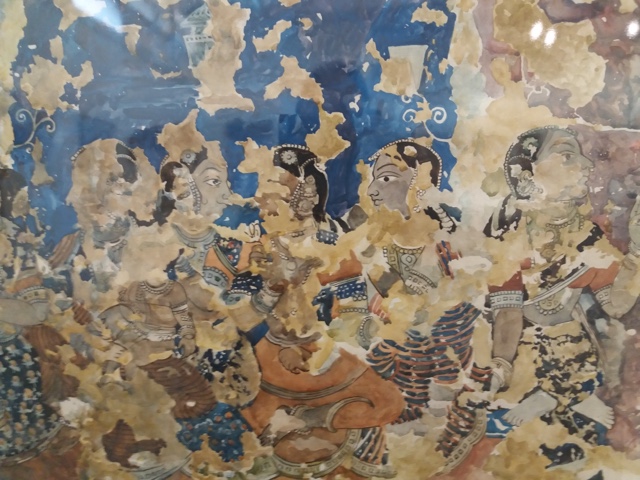 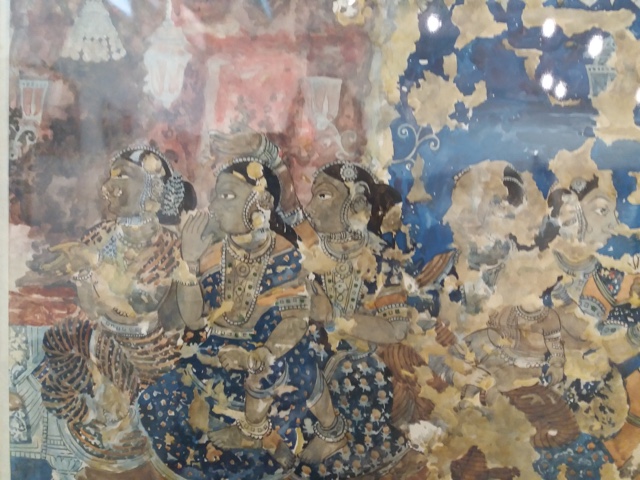 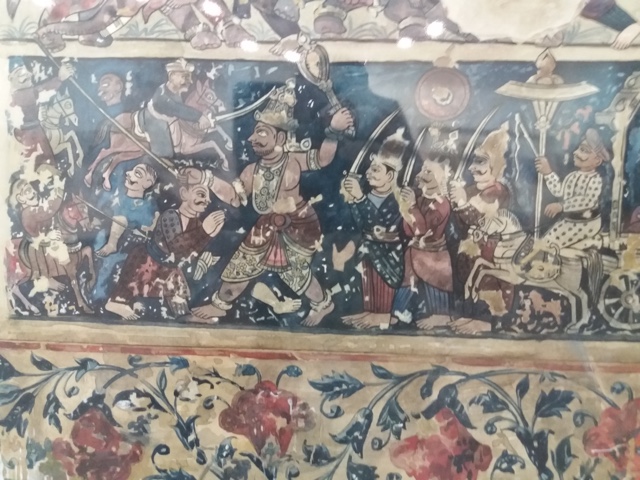 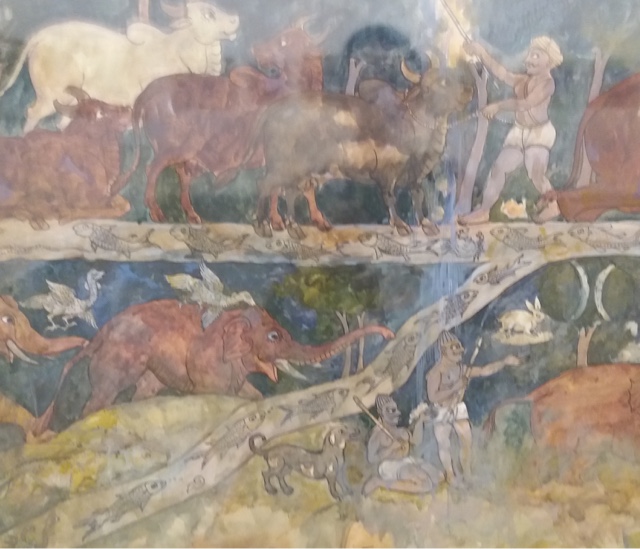 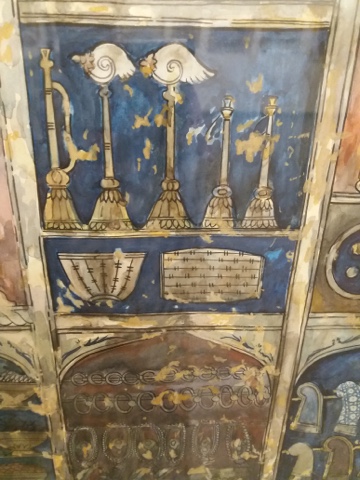 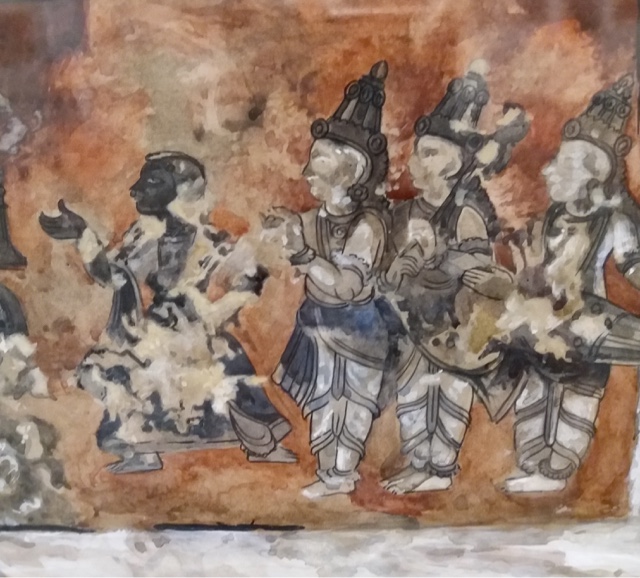 These are the murals that were sought to be preserved by Lalitha Kala Akademi . The murals were created on wet plaster with mineral and vegetable  pigments , the palette confined  to the Panchavarnas , or the five auspicious colours : red, yellow, green , white and indigo . Black soot was used for outlining.

The style is medieval , Nayaka inspired , showing a lot of typical Mysorean characteristics . The murals can be dated  not earlier than mid 19th century . It is befitting that the Akademi chose artists who had exposure to Mysore Art to do the replication . 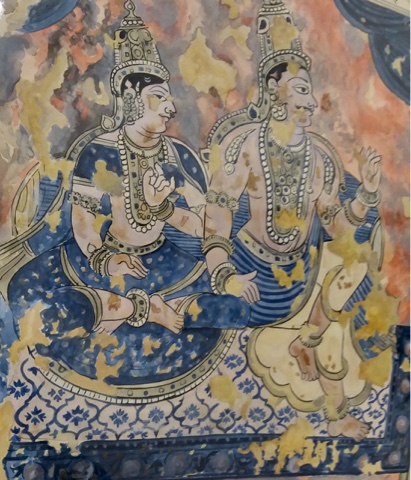 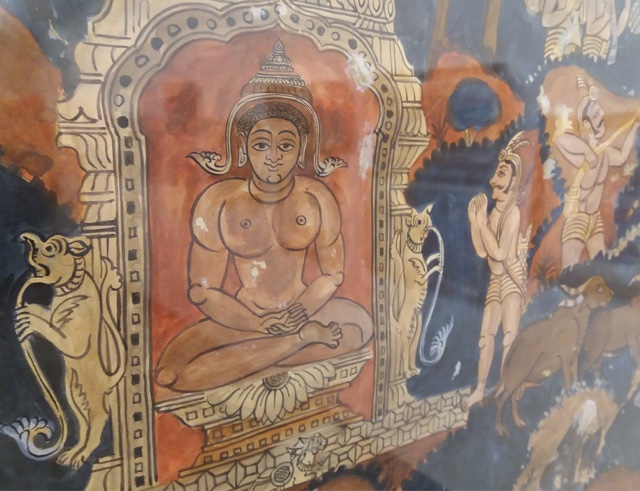 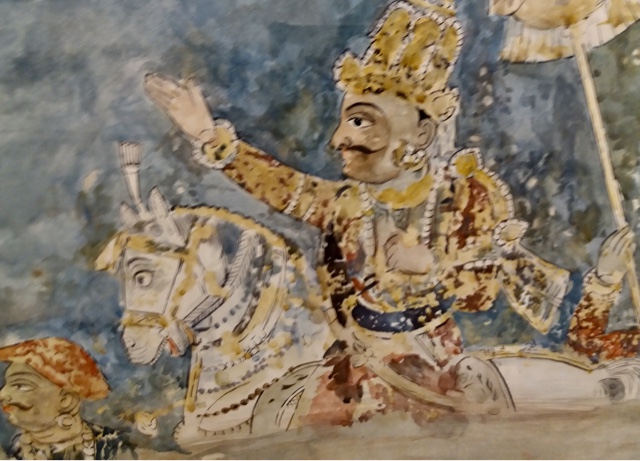 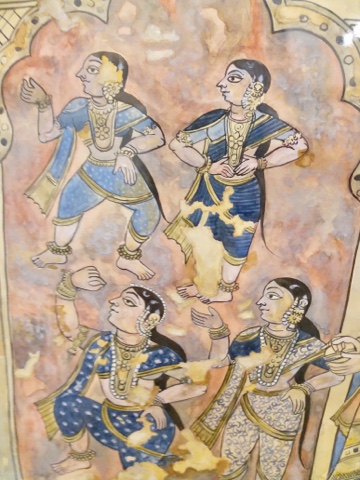 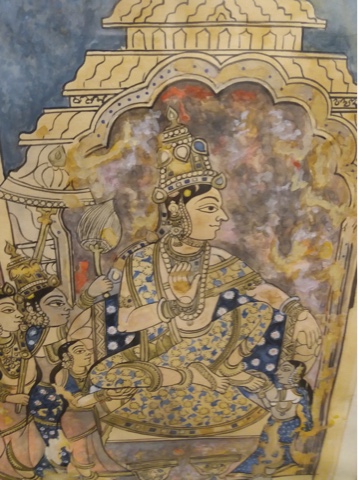 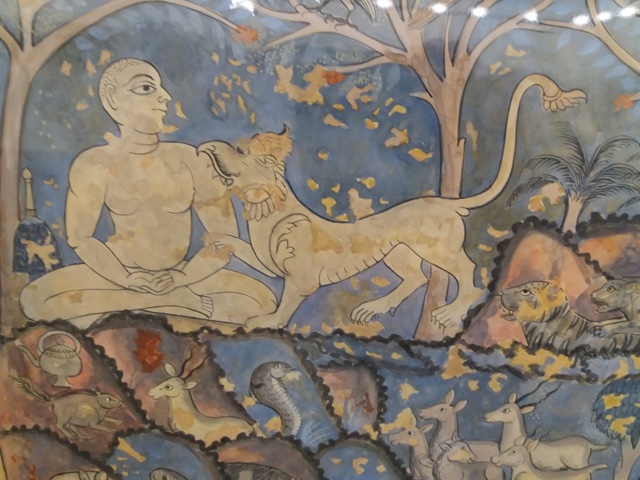 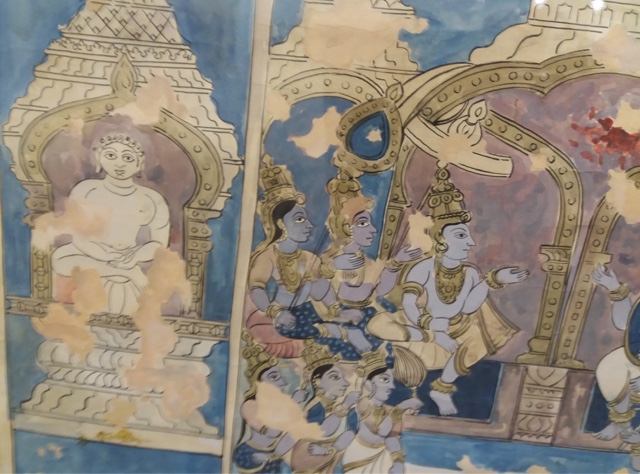 The subjects seen on the murals are varied , not strictly devoted to mythology.

There are panels showing the darbar of a contemporary  king , illustrations of musical instruments and weapons and hunting scenes , along with portraits of Jinas  , yaksha-yakshis , Panchaparameshtis , Tirtankaras etc  and narrative panels of certain legends. There is also an intricate yantra like rendition  of Parshwanatha's  Samavasarana.

The borders of panels are neat and simple creepers with stylised blossoms. 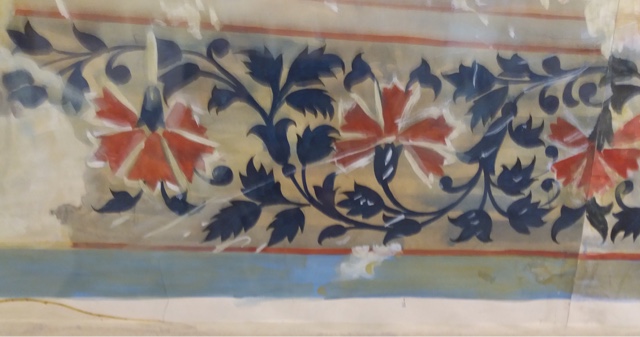 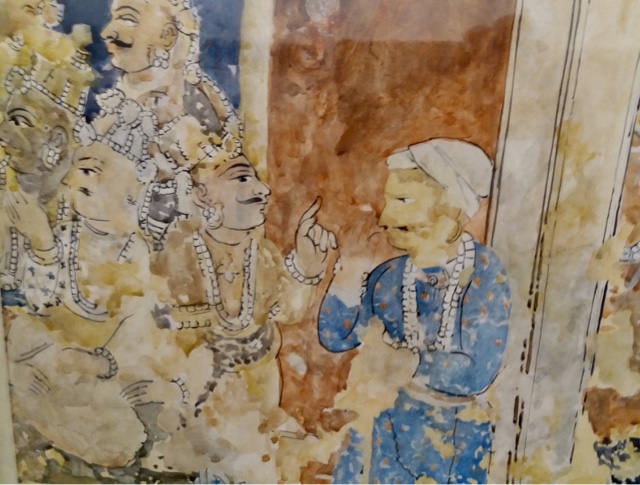 It was gruelling work for 46 days for the artists . At the end of which , the Akademi had in its hand the next best thing to the murals themselves : faithful True Copies  that were exact replications  of the colour , size and condition of the murals - chipping, fading , deterioration included.  Nothing was prettified , nothing was glossed over . The medium used was water colours, which closely approximated the natural colours left on the old plaster .  The result was awesome . Something which photography could 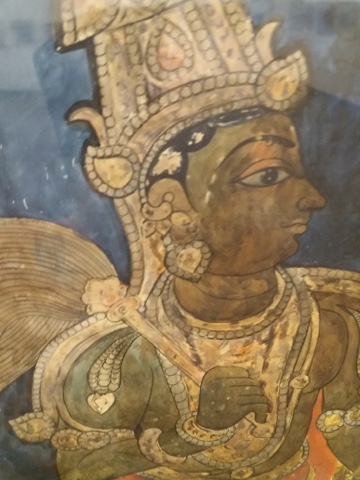 In view of the Mahamastakabhisheka to take place soon at Shravanabelagola , the Akademi had put these works on  public show for a week  in Chitra Kala Parishat . ( last week of Jan 2018)

The replicas look real ; the strokes and smears can actually be seen ; the chipped plaster , authentic. Amazing work indeed. 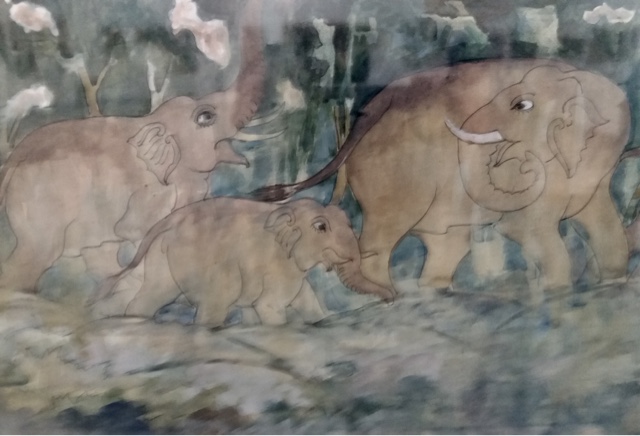 Unknown said…
How amazing Vidya that the documentation remained true to the original condition of the murals.The elephants are adorable !
February 3, 2018 at 9:14 PM

Popular posts from this blog

A mysterious Hero of Many Names 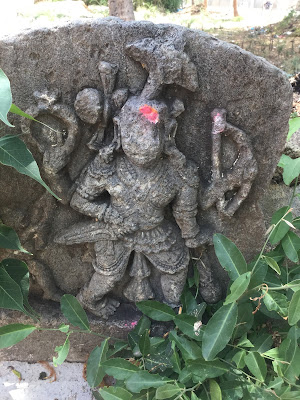 Finding Ravaleshwara  .
Veeragals , ( Hero stones ) turn up regularly in rural areas where development has not been fast and furious . Passing through countrysides , if one keeps eyes open , one is sure to stumble upon memorial  stones , lying by dried up tanks , near temples , in fields and wastelands , under trees or serving the village as a washing slab , a post to tie up cattle , as steps to a granery etc depending on size and thickness . Many a time they are also smeared with turmeric and vermillion in a show of respect .  In oral tradition , folk lores are built around a heroic event that happened  in the history of the village  ; these  then grow into sacred mythology . In time , the much celebrated Hero turns into a Village Guardian whose spirit  protects the village  . Finally he becomes a god , an Ishvara .
Veeragals are generally rectangular  slabs with figures carved  in bas relief in narrative strips . Among the hundreds of sculpted stones found around the Old Mysore area ar…
Read more 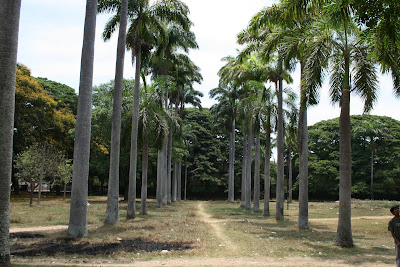 Old Mysore was full of parks and gardens. And Nishat Bagh was one of the most beautiful gardens in town. It is frozen in my memory like a beautiful Renaissance painting.

Situated next to the Hardinge Circle , this ( approx.) 10 acre lung space was lush, cool and beautifully laid out. The huge, sprawling rain trees there seemed more than a century old. And the cobbled avenue running from one entrance to the middle of the park was lined with two straight rows of magnificent palm trees which gave it such a regal, ceremonial look. Small fountains and old fashioned wrought iron lamp posts dotted the emerald spread of lawns.

And best of all, the park boasted the loveliest Gazebo in the whole royal city. This small pavilion, which served as the Band Stand, had pretty , turn- of- the -century European style railings and pillars and a high dome panelled with Glass Paintings of Mysore Art style.
From the centre of the dome hung a sparkling victorian lamp- shade of brilliant green g…
Read more 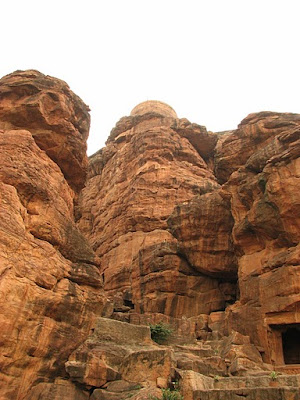 We were standing on a flat rock, hedged in by GIGANTIC, craggy cliffs on all sides, catching our breath before tackling the next fleet of steps leading to the pavilion called The Lower Shivalaya.
Carved into the rockface at the very base of the red sandstone massif on our left was a tiny Hanuman in bas relief, smeared with turmeric and vermillion and perfumed by a bunch of dying agarbattis. Traditionally, Hanuman is a guardian of wayfarers. Considering that the whole valley is overrun by armies of marauding monkeys, its always useful to be in the good books of the Big Boss. We dutifully uttered our prayers and proceeded left towards a lovely stone gateway heralding the Shivalaya. Another fleet of steps ran off rig…
Read more